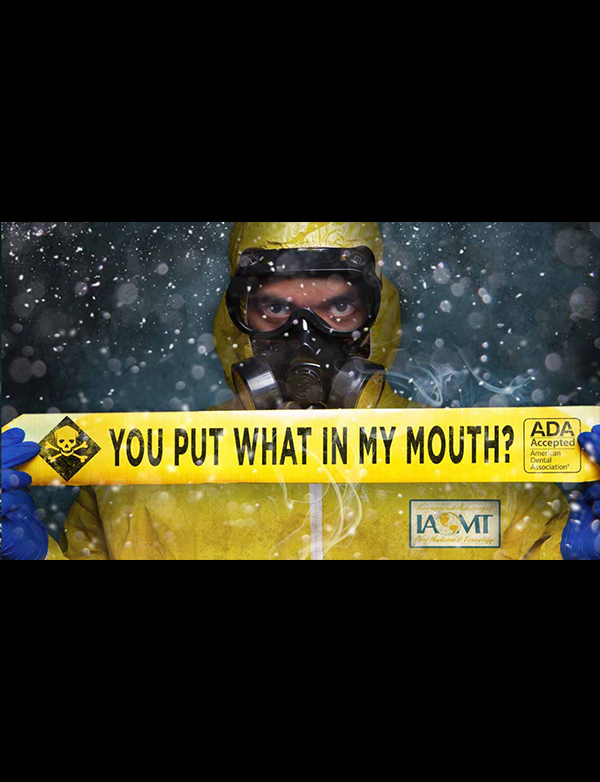 You Put What In My Mouth? An Exposé of Dental Amalgam

The documentary You Put What in My Mouth? follows the lives of three health advocates as they struggle to inform the federal government and public that vast amounts of mercury vapour and particulate matter are being released during the removal of “silver” amalgam dental fillings.

When the fillings containing 50% mercury are heated by the friction of a dentist’s drill, toxic mercury vapours are released that are invisible, colourless and odourless.

“Exposure to these toxic vapours is a grave concern as published research shows they contribute to a host of adverse health symptoms.” said biochemist Boyd Haley, PhD.

Haley went on to explain, “We have visually demonstrated the mercury vapours generated during routine dental procedures and this shocking footage reveals the peak levels of mercury released during an amalgam removal are vastly higher than limits at which people are evacuated from buildings.”

“I’ve never seen levels of mercury this high,” says Alex Hummel, a professional with Mercury Instruments USA, who measured the levels of the toxic vapour during the demonstration.

“Since dental professionals are not taught about the toxicity of mercury amalgam nor of the hazardous vapours it emits, they are unaware of occupational safety regulations mandating that employees be informed about and protected from toxic exposures,” says Matt Young, DDS. Young, a member of the biological dental organization, the International Academy of Oral Medicine and Toxicology (IAOMT), is a “mercury safe” dentist.

The IAOMT has created a number of mercury safe protocols to reduce the amount of mercury to which both dental staff and patients are exposed.

Levels of mercury released during an amalgam removal are vastly higher than limits at which people are evacuated from buildings.

Dr Rachel Hall of Evolve Dental Healing is a “mercury safe” dentist and member of IAOMT and stringently adheres to the protocols that the IAOMT has created in her dental office.

While the manufacturers of amalgam have never proven the safety of their product, the Food and Drug Administration (FDA) allows the product to be sold and promotes it as safe.

Government reviews of mercury have found its toxic effects are broad, variable, idiosyncratic, and often delayed. Neurological problems, cardiovascular disease, kidney dysfunction, and many other disorders have been linked to mercury.

About the Film, You Put What in My Mouth?

This documentary was created to raise awareness about the toxic effects of mercury amalgam dental fillings on patients, dental staff and the global environment.

Media Contact:
Randall Moore
Do No Harm, LLC
Phone: (913) 731-0164
Email: randall@youputwhatinmymouth.com
Please share with others and on social media!

If you have silver fillings they contain mercury. Mercury is released from the filling and is absorbed into your bodily organs and cells. Mercury is a highly toxic heavy metal.