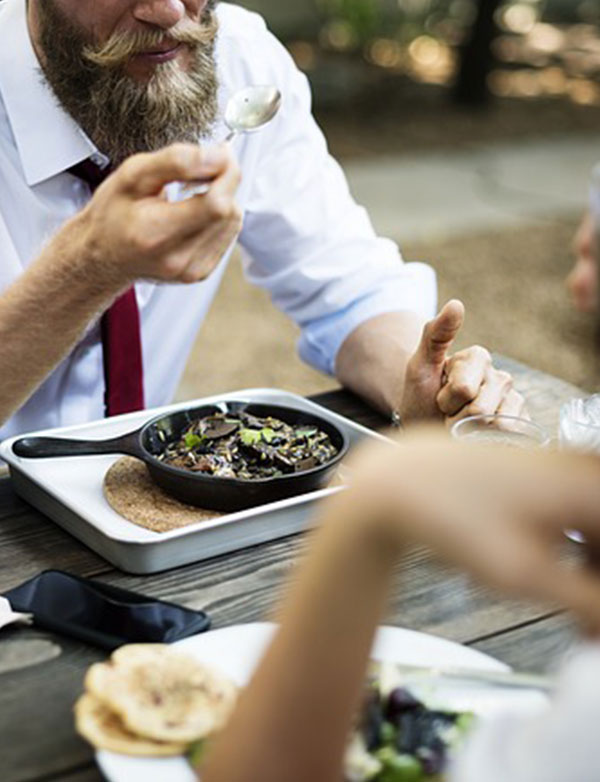 Is you want to eat less then chew your food more. Good dental health and a full set. of teeth not only give you an attractive smile they are an essential part of nutrition.

Nutritionists in China found when both lean and obese young men chewed more at a meal, they ingested fewer calories and had more favourable levels of gut hormones in their blood, lending credence to the saying “Eat less, chew more”.

Two studies were carried out. In the first study, they observed the differences in chewing habits between the lean and the obese group. In the second study, the participants were offered the same test meal on two separate occasions. For the first occasion they were asked to chew at a rate of 15 chews per 10-g bite of food, and on the second occasion at a rate of 40 chews per bite. The test meal was breakfast with a total energy value of 2200 kJ (68% as carbohydrate, 21% as fat, and 11% as protein). The volunteers gave blood samples after each meal so the researchers could measure circulating levels of blood sugar and gut hormones.

The results showed that: Despite having a similar bite size as the lean participants, the obese participants ate faster and chewed fewer times per 1 g of food.

Both obese and lean participants ate 12% fewer calories in the meal where they chewed more times per bite.

The researchers concluded that interventions aimed at improving chewing activity could become a useful tool for combating obesity.

One limitation is that not all calories people ingest come from food that requires chewing: for example ice cream, sugary and alcoholic drinks, so it is unlikely that chewing more will cause people to reduce their calorie intake by 12%, as the participants did in this study, which was based on one solid food test meal.

Obviously though to combat overeating and obesity it is not enough to simply look at what we eat but we must also address the way in which we eat and how we eat.

How many of us eat on the run, watching TV or totally distracted and disconnected etc?

By chewing more and slowing down when we eat we can connect to ourselves and the food and actually feel when our body tells us it is full.